In this part one of a three part cross country flight planning series, you will walk through a large cross country trip over that encompoasses some strong planning. You will learn about cross country planning a VFR/IFR trip using a real world trip previously flown. You will gain insight into how both IFR options as well as VFR only options for this trip.  You will learn about the benefits of having an Instrument Rating as well as gain an understanding of what the trip could look like when flying VFR only.
You will experience:

The first major leg of the 1750NM cross country trip starts in Idaho and goes through four states before returning to Idaho. Your planning first starts with a mindset for both the skill of the pilot and the capability and load of the aircraft. The aircraft for this flight will be a 1977 Piper Turbo Arrow, with full IFR equipped panel and hybrid glass cockpit (Garmin GTN 750, Traffic and Steam gauges Pilot side). This aircraft has a 200HP Continental TSIO-360 engine with a Merlyn Magic Waste Gate. 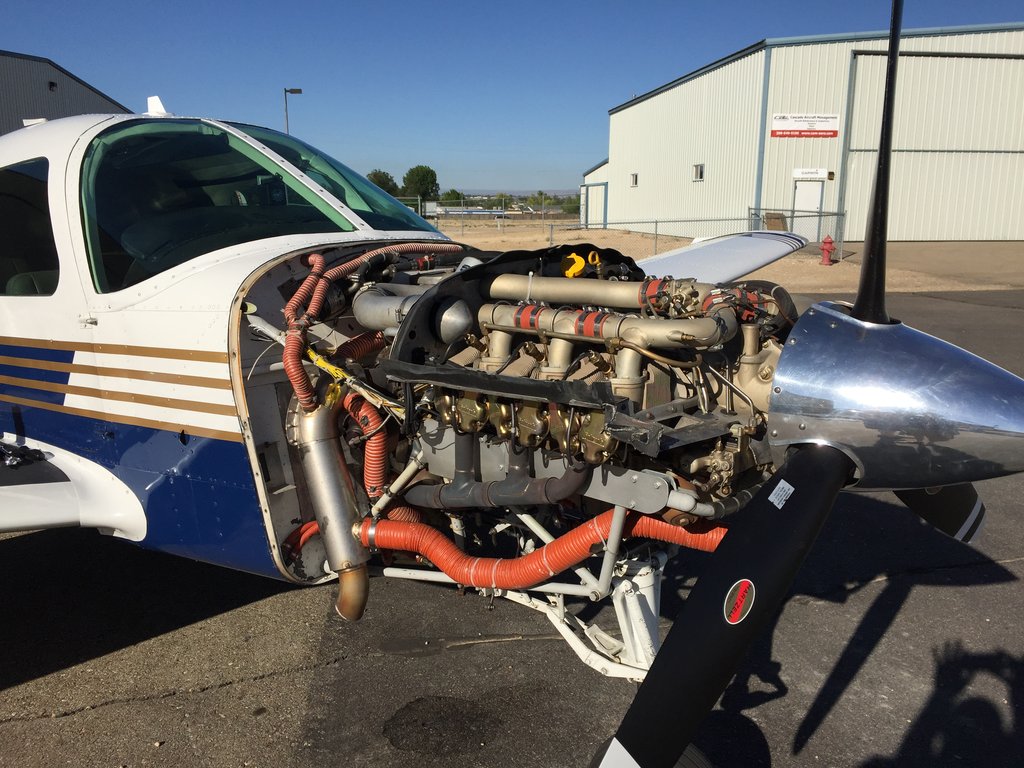 The first leg of your journey is going to take you west of Reno. Direct Reno – Direct Oakland would have been the prefered route. However, due to weather that route is not an option for your aircraft capabilities. The new route will take you along V (Victor) airways.  You will fly west toward Burns Oregon then proceed to Klamath Falls before turning south to Redding California for a fuel stop. Finally you will open an IFR flight plan into Oakland where the ILS approach system is being used to descend through the 1,200ft layer. We will look at more information about VFR options as the article continues. 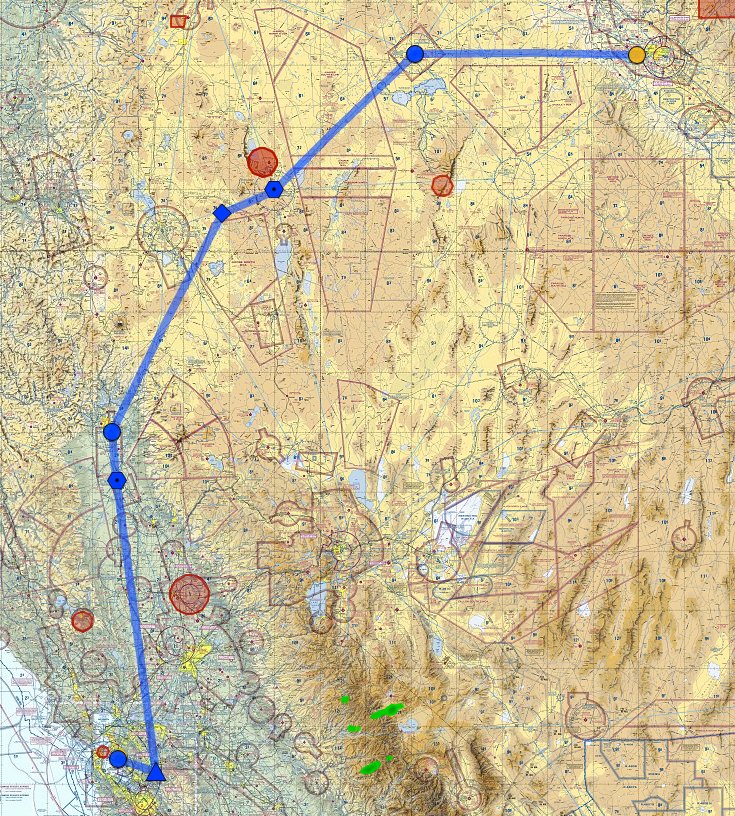 Your original route for the first part of the trip was forecast to be a marginal option at best the night before our initial departure, due to inclement weather. Your original plan was to fly KMAN – KRNO – KOAK with a fuel stop in KRNO. You have flown into Reno before and you know that Reno is a hot spot for weather, high density altitude and turbulence. Generally you prefer to pass through/over Reno early AM unless your able to cruise with oxygen at 16,000 MSL or higher.

Besides the weather and turbulence, the MEAs (minimum en route altitudes) required to file an IFR flight plan (Instrument Flight Rules) into Reno are very would require Oxygen for the Pilot -[Flying High Altitude Cross Country Trips Course]. You determine useful alternative option is to fly VFR with flight following to allow you to fly at lower altitudes without the need for supplemental oxygen in the plane -[VFR when IFR MEAs are too high].  You also know that your O2 (oxygen) tank is currently empty from your last flight home from Reno.  You make a conscious decision to take the tank with you so you can fill it at one of your stop for you flight home in a few days.
Hover over the dots to see waypoints and MEA along the IFR path. 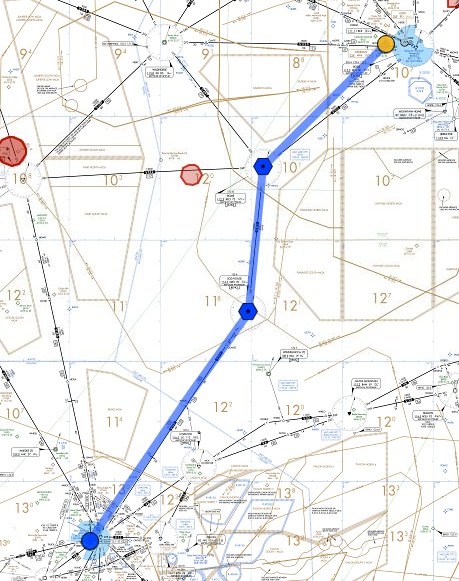 You already know about Reno and challenges the location can have but you also see that there is  weather extending between theREO(rome) VOR and the SOD(sod house) VOR. You have been through this area many times and have been forced to reroute because of weather numerous times.

Due to this build up of weather your plane would not be equipped to handle icing if precipitation were near freezing levels at your required altitudes. With the high altitudes along our flight path, we would surely be at or below 4c OAT which equals a non-route for you in your non-fiki (flight into known icing) aircraft with an empty supplemental oxygen tank [Not taking unnecessary risk – making go no-go decisions]. 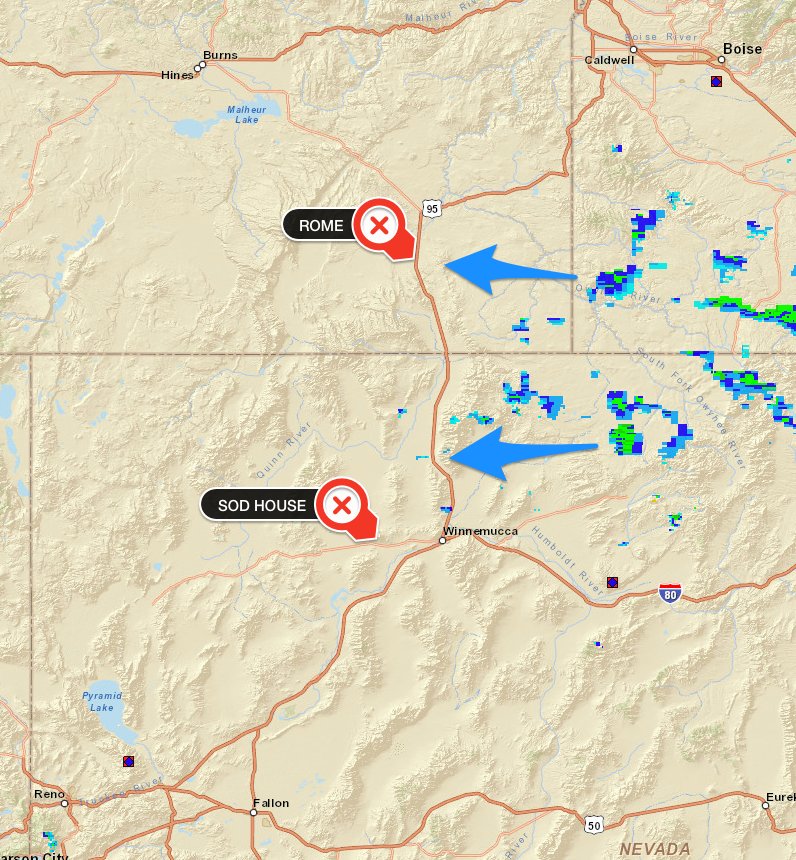 All planning requires you to dig into all your options including charts, Prog Charts, Skew-T Log P (here in this article), PIREPS, TAF and MOS as an example. It is also very hard without good Pireps along your route of flight to get a clear picture of what the cloud tops and bottoms will be.  You can leverage Skew-T Log P for some of this data.   After planning and looking over the weather for well over an hour it was an easy decision. Don’t risk it, spend an extra 20 minutes in the plane and head west first towards Burns, Oregon where it is clear.

You proceed on your flight and find it is truly amazing weather along your new route!

Mt. Shasta off in the distance

So the flight was smooth and uneventful. You land in Redding Ca, on-boarded  fuel and file your IFR flight plan to Oakland.

With 50Gal onboard the plane, you load up the family and pickup your IFR clearance to Oakland. As you review the Oakland weather you can see that the morning started out at 100ft and 1/2 mile (LIFR) but by the time you leave KRDD reporting is  2 miles and 300ft. You know that as long as you can get minimums for the ILS you feel confident you will be in good shape. You also realize that your [personal minimums] and your proficiency as a pilot is key to making that decision.

Your clearance out of Redding assigns the Homan2 DP (Departure Procedure).  You opt to fly the departure procedure as you know it is good preparation for you prior to going into IMC conditions either enroute or on the approach end of the trip. You also happen to have a qualified safety pilot with you so you also choose to use a view limiting device to prepare your mind.  You opt’d to use the view limiting device because it was #ExtreameVFR outside as noted in the picture above.

Below is the Departure Procedure.

Read below in more detail if you are not familiar with how a DP would work.

This DP is very straight forward. You will be departing runway 34 so it is a simple right turn to intercept the RDD VOR Radial R-111. Track outbound to HORMAN Intersection and cross the HORMAN INT at or above 4,000 ft.

Your are pleased at your skills as an IFR pilot as this approach required speed from the controller well above normal. You pitched the nose down to start the approach at about 120KIAS and quickly hit 155KIAS. The controller requested you maintain 150-155KIAS until a 5 mile final. Typically you would fly a stabilized approach in your Arrow at 105KIAS and with the gradient for this approach you would yield approximately a 500 FPM (foot per minute) descent. However, speed up to 155KIAS and you end up pulling 1,000-1,100 FPM. Not a hard thing if you are proficient in both the plane and the procedure.

Information: You  know that you always have the option to inform the controller that you cannot comply with their requests. Today you had no issue with the request and you continued the approach.

Due to the fact you were well over both Gear speed (Vle) of 129 KIAS as well as Flap speed 105 KIAS, it was the perfect opportunity to deploy speed brakes at the 6 nautical mile mark to slow the plane down.

Here is a quick video of the speedbrakes.

I often get asked why anyone would ever put speedbrakes on a PA28R-201T. I can tell you I use them almost every flight for all the standard reasons you want speed brakes.  Learn more about the benefits of speed brakes in this free article [why speedbrakes].

Ceilings turned out to be 800ft and 10sm visibility below the layer by the time you arrived at the Oakland Airport. What a great flight, other than low air pressure in your tires the next morning (due to lower altitude) your next leg would also be a joy. (Part II)

Lets face it, not everyone is instrument rated and even if you are instrument rated you may not be comfortable flying in true IMC yet.  We do have some VFR options around the Oakland area. As a VFR only pilot you can almost always find an alternative airport if you are willing to do a little more driving. A great example is KCCR (Buchanan) airport, not far from Oakland and it is almost always VFR. This airport has good facilities and would work fantastic for someone needing to get into the area without and instrument rating.

More details about KCCR as an alternate provided your fine with the drive [planning your alternates].

The drive depending on the time of day may take you a decent amount of time, but it’s at least an option.